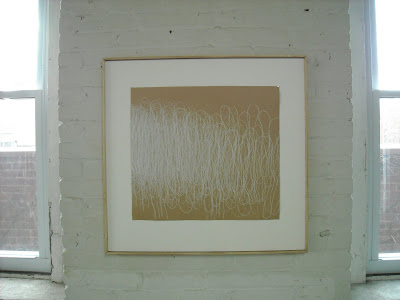 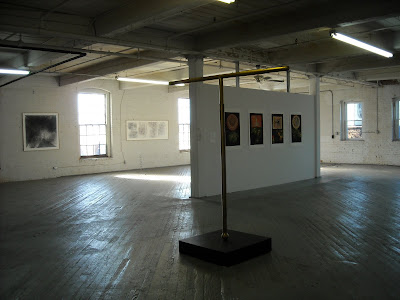 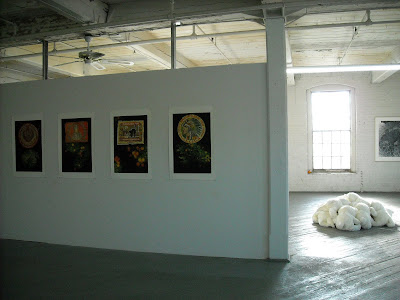 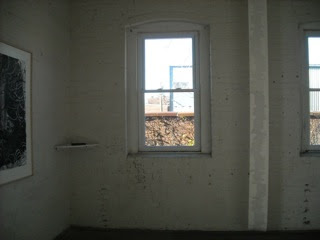 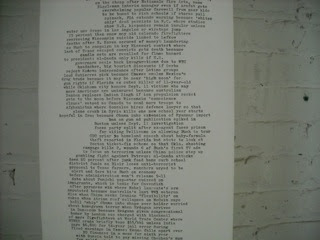 Installation of John Delk's Universal Remote, a reproduction of a television remote cast in lead,
and Stream, an unending series of headlines from the Wall Street Journal typed on fax paper.

Photos from the opening 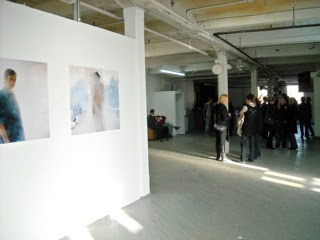 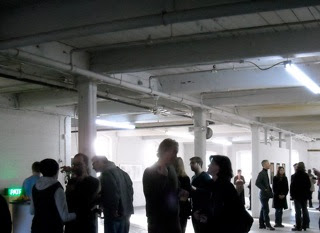 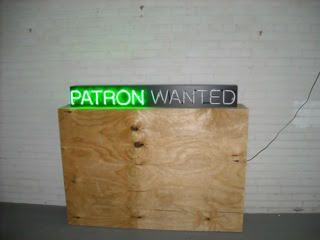 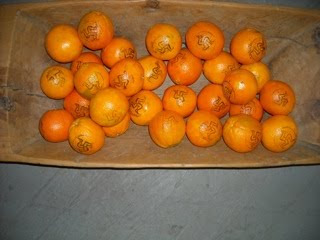 Party Favors from our friends at Newburgh Art Supply 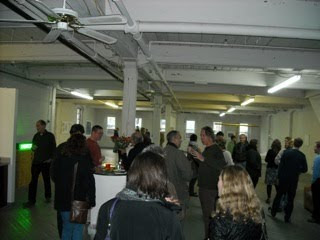 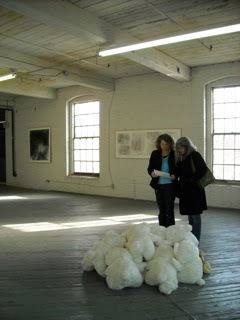 Two visitors look at John Delk's Pleading in the foreground.
The work is comprised of a pile of plush teddy bears from whom recordings from prayer hotlines can be heard.
In the background are two of Barbara Smith Gioia's silkscreen monoprints. 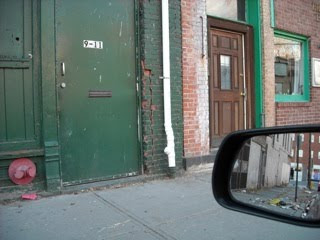 The doorway.
Posted by jackie skrzynski at 10:05 AM No comments:

The Hudson Valley has a thriving creative community. We benefit from our proximity to New York City through the number of talented artists who are attracted to the area. They live quietly among us, some well established, and some well on their way. Although Orange County is better known for its highly skilled landscape painting and photography, it does have pockets of artists who are making other types of work. Engaging with conceptual and formal considerations, these artists often find venues to exhibit outside of the area. The Pop-Up Gallery (PUG) offers them a space close to home.
PUG Projects had its first exhibition almost six years ago across from the Yellow Bird Gallery on Front Street. Now many more artists have relocated here from high rent areas south and east of us. Still, Orange County, particularly Newburgh, struggles to meet “critical mass,” not yet attracting the broad support for artists that our neighbors enjoy. It is coming, and Newburgh certainly has the empty buildings and easy ferry access to attract it. PUG Projects intends to encourage the trend. By staging exhibits in unrented or transitional spaces, it draws artists and art lovers to potential galleries and studios. By exhibiting artwork that is concerned less with commercial viability than in making us think, PUG Projects brings attention to the diversity of art being made right here in Orange County. The five artists in this exhibition are a mix of long time residents, new arrivals, emerging and established. I am so pleased to be able to “out” them as artists to their neighbors. ORANGE ALERT!

Stephanie Bursese was chosen to participate in a residency in Philadelphia called The Welcome House. At the entrance to the JFK Plaza (also known as the “Love Park” for its famous Gary Indiana sculpture), she filled a small glass house with fog and invited park users to have their portraits taken. The resulting images are mysterious and somewhat ghostly. The defining characteristic of each portrait relies not in the face but more in the posture of the subject. The wafting haze suggests an unknowable, ephemeral state of being. Bursese recognizes how photography attempts to mitigate obscurity even while documenting it.

Robert Brush makes work with a wink and a nudge, creating serious art about art world absurdity. The well-crafted objects from his Whole Lotta Love series are definitely humorous, but Brush offers far more than a wry smile. What does it mean to have a golden diaphragm displayed as a pristine museum piece? Or an IUD represented as a 9-foot tall phallus circa 1960 minimalist sculpture? They seem hermaphroditic. “Conception” is a term used to describe the creative process, yet these devices play with words and meaning. They are conceptually conceived contraceptives. Art and sex have always made good bedfellows, and Brush’s work finds purchase in that fertile groove.

John Delk reconfigures mass media into visual and audio blurs of endless streams of information. Among other things, they play with ideas of comprehension and “value-added” communication. Consider Universal Remote, a replica cast in lead. What if every time you picked up the remote, you were actually poisoned in such a way that made you gradually morph into an idiot? The works often depend on our physical proximity, which subverts digital reproduction. Like most art, they need our presence to simply communicate, and Delk’s works fascinate in straightforward sensory ways. They become strangely meditative, like streams of consciousness. Information, like any perception-altering drug, can enlighten in small doses, but too much can lead to addiction.

David Freund has an eye for unusual printed artifacts from bygone eras. He is a consummate collector, yet as an artist, he experiences his collection as metaphor and iconography. In this series, he photographs early 20th century illustrations that decorated the tissues used to wrap oranges for shipping. Although directed to the consumer, Freund uses the wrapper images as a window into an invisible community of workers who picked the fruit. Rather than making work about labor or landscape, Freund chose to simply depict the orchard’s beauty at night as a background to the enlarged images. The juxtaposition transports us in strongly empathetic ways, enhanced by Freund’s poetic description of the series.

Barbara Smith Gioia is the aesthete in the group. Her creative process is as brave as running to the edge and jumping. In other words, she has no preconception of what her work will look like when she starts, but develops an intensely mindful dialogue with each piece that guides her toward completion. Stomping, like monoprinting, involves building layers of images onto paper, using an unhinged silkscreen that the artist can move around the surface of her image to print. Expressive marks create the foundation image. Smith Gioia preserves the presence of the artist’s hand through an elegant balance of repetition and singularity.

I sincerely thank each of these artists and the many people who helped to make this project happen. I am particularly grateful to Orange Arts of Orange County Tourism for their financial support.
Jackie Skrzynski
Curator

Curator’s Bio:
Beyond her studio practice, Jackie Skrzynski is interested in projects that bring art to the community in creative ways. She organized the Silent Walks on the Half Moon, a year-long group performance at Storm King Mountain. It was later part of the Hudson Valley 2010: Contemporary Art and Praxis exhibit at the Dorsky Museum at SUNY New Paltz. Skrzynski exhibits her drawings and paintings nationally and in 2009, she was nominated for the Painters and Sculptors Grant from the Joan Mitchell Foundation. In 2011, her work will be part of the exhibit, Art about Motherhood: The Last Taboo, curated by Diana Quinby, in Avallon, France. Orange Alert marks her fourth curatorial project.
Posted by jackie skrzynski at 9:52 AM No comments: 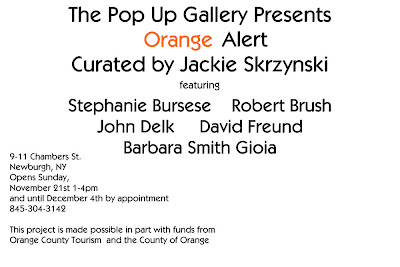 Please join me in celebrating the next reincarnation of The Pop-Up Gallery. This exhibition features the well known who quietly live among us. The five artists: Stephanie Bursese, Robert Brush, John Delk, David Freund, and Barbara Smith Gioia have exhibited widely outside of the area, but have rarely, if ever, shared their work with their local community in Orange County.
The Pop-Up Gallery's mission is to transform unrented or, in this case, transitional spaces into a gallery for a short period of time. Artists and art lovers have an opportunity to see artwork that is not often shown in Orange County while participating in the cultural revival of an economically diverse area. Chambers Street is off Broadway, almost directly across from the Ritz Theater. (Ann Street Gallery and the cafes and shops on Liberty Street are just two blocks away.) The exhibition uses the second floor of a restored warehouse that is being rented as artists’ studios.
Please come and bring your friends! This is the good kind of Orange Alert.
This exhibition features only Orange County artists. While two are new and three are long-time residents, all are widely recognized elsewhere but virtually unknown here. The Pop-Up Gallery is interested in showing challenging work that is under-represented in Orange County. Support your local artists!
The opening is on November 21st from 1-4pm.
9-11 Chambers Street
Newburgh, NY 12550
(off broadway across from the Ritz Theater)
ring the buzzer

The exhibition is open by appointment until December 4th.
845-304-3142
This project is made possible, in part, with funds from
Orange County Tourism and the County of Orange.
Thank you for your support!
Posted by jackie skrzynski at 4:32 PM No comments: